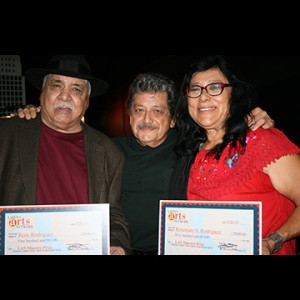 Rosemary and Rene Rodriguez have been actively involved Teatro Urbano for over 40 years. Along with generations of their family and community members, Teatro Urbano has continually presented the longest running Chicano play “The Silver Dollar,” about the poignant events in Chicano history and the death of Ruben Salazar.

After returning from Viet Nam, Rene Rodriguez founded Teatro Urbano. Over the years, he has written, staged, and directed work such as “El Tecato y La Curaracha,” “The Farrah Factory,” ”Who’s To Blame,” “Detective Sanchez, The Ortiz Case,” “Beto’s Dream,” “Joaquin Murrieta, The Musical” as well as the longest running Chicano play, “The Silver Dollar.” He wrote for Telemundo’s award-winning telenovela “Angelica, Mi Vida” and Univison’s “Pepe Plata,” “La Cita,” “Amigos Para Siempre,” as well as his own independent film, “Carne The Taco Maker.” Along side his family and community, Rene has actively produced for over 40 years. In doing so, he has bought theatre and film to the greater community by educating and encouraging involvement and participation in acting, writing and filmmaking. Rene Rodriguez was awarded a LAN Maestro Award in 2015.

Rosemary Soto Rodriguez has been involved with Teatro Urbano since 1974 as a producer, actress and director. She has been actively involved with Chicano Theatre since the early ‘70s when she worked with Teatro Popular, from Long Beach and taught Chicano Theatre at California State University, Long Beach and East Los Angeles College. She has performed in “Detective Sanchez, The Ortiz Case,” and “The Silver Dollar.” She has also acted and produced several short films, independent films, television and photo novellas as well as the full-length motion picture, “Carne The Taco Maker.” Rosemary continues to work in her community, to ensure that the legacy of Chicano Theatre continues. Rosemary Soto Rodriguez was awarded a LAN Maestro Award in 2015.

<< Back to Maestro Prize