The Latino Arts Network of California (LAN) was born out of a chain of cultural centers that linked the state. LAN is dedicated to strengthening and deepening the cooperative relationship among California’s Latino artists, arts organizations and the communities we serve. 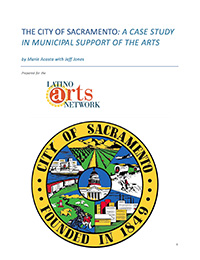 The City of Sacramento: A Case Study in Municipal Support of the Arts

At the June 2013 annual meeting of Americans for the Arts, keynote speaker Dr. Manuel Pastor, Professor of Sociology and American Studies & Ethnicity at the University of Southern California, offered these words:

The Latino Arts Network of California (LAN) agrees. The Network launched an initiative to study to what extent are equity and inclusion reflected in the distribution of Sacramento’s public funding for the arts?

According to the State Department of Finance’s January 2013 release of new population projections, California’s Latino population will equal the number of non-­‐Hispanic whites by mid-­‐2013. 1 Sacramento’s current population breakdown, much like the rest of the state, is becoming browner and younger:

THE CITY OF SACRAMENTO: A CASE STUDY IN MUNICIPAL SUPPORT OF THE ARTS, authored by Marie Acosta and Jeff Jones, reviews the City’s alloca=ons of public money for art and culture. We hope the study’s findings will launch a dialogue about cultural equity and inclusion.